NOTES FROM ANOTHER SMALL ISLAND: MAKE THE MOVE TO SUNNIER, EASIER AND MORE EXOTIC SHORES

Notes From Another Small Island: Make The Move To Sunnier, Easier And More Exotic Shores

Bombarded as we are during bitter January days with images of celebrities decamping to balmy beaches, the idea of living on a tropical island becomes pretty seductive. Imagine weekends spent in the sun, a life lived outside all year round and that feeling of complete escape.

While a better quality of life remains a big reason for relocating off this island to a warmer alternative, there are also financial benefits.

“Many Caribbean islands now offer residency incentives to attract overseas investment, as well as the increasingly popular Indian Ocean locations, the Seychelles and Mauritius,” says Robert Green, founder of the property consultancy Sphere Estates. “Personal and financial security will also be important factors for buyers too.” 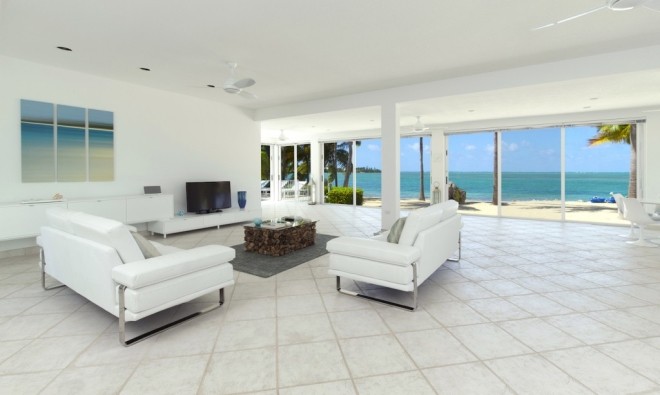 But how easy is it to adapt to an island halfway across the world, and what is life really like in paradise? For Alex and Brett Gregory-Peake, who moved from Battersea in south-west London to Mauritius 11 months ago, it was a “great opportunity” that came with a three-year work placement.

When Brett, 40, became the chief executive of Royal Park, a beach and golf resort in the north of the island, they moved into a four-bedroom house in Cap Malheureux with their daughters, Gracie, three, and Louelle, 21 months. 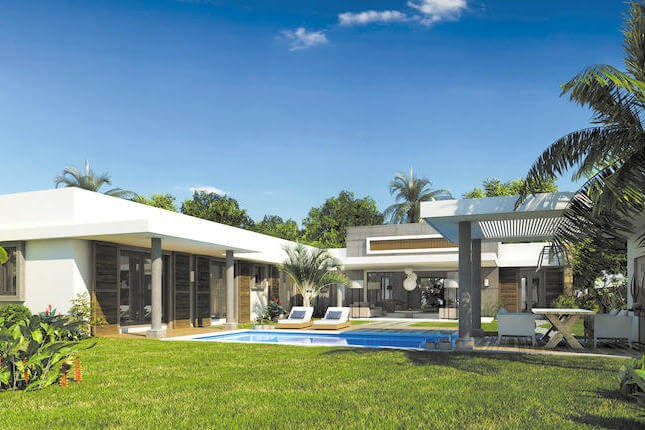 On Royal Park, a 222-acre site overlooking the Bay of Balaclava in the north-west of Mauritius, this three to five-bedroom villa is built on generous plots with a landscaped garden and a swimming pool. It is €1.5 million (£1.3 million) through Royal Park Mauritius (00 230 286 7070; royalpark.mu)

“I had never been to Mauritius before and thought it just somewhere that honeymooners visited, but it is so much larger and more developed than I thought,” says Alex, 36, a brand manager for a textile business. “There are all sorts of opportunities for expats with management experience, in finance, retail or hospitality.”

Weekends are spent doing water sports at the beach, with boat trips out to the islands off the north coast (most locals have a boat) and trips to Grand Baie, the biggest tourism hub. All other amenities can be found in the island’s capital, Port Louis, which is 40 minutes’ drive away.

“They say it takes a year to adjust to settle into a new life and we are beginning to adapt to the laissez-faire attitude,” Alex says. “As soon as I began to accept that the high-convenience factor of London life is not here, I started to enjoy it.” 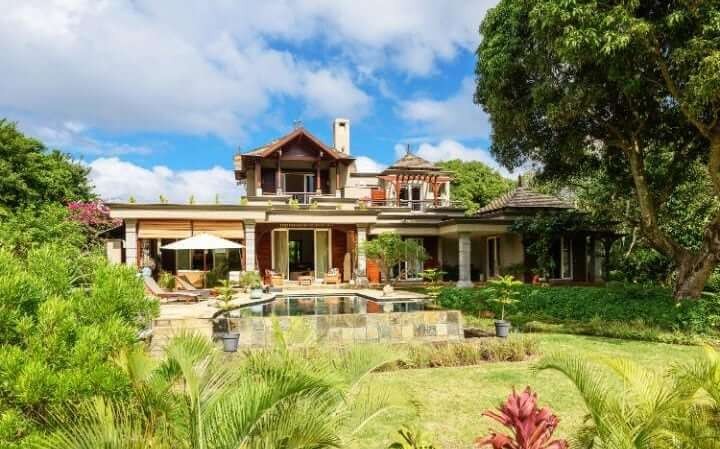 A three-bedroom villa in Mauritius, right, is $1 million with Sphere Estates

The quality of the infrastructure and the health care is high, says Alex, who is expecting their third child. “Mauritius feels a very safe and secure place. What little crime there is here is traffic-related,” she says. “I work full time and the cost of childcare is a fraction of what it was back in London. We have the only English nanny on the island and our housekeeper costs £200 a month.”

With French-based Mauritian Creole the main language spoken on the island, although English is also used, Gracie has enrolled at a bilingual French school and is likely to be fluent in French within a year. “We see this as a massive plus, along with the fact she can have play dates on the beach,” says Brett. “It’s also great having a whole different area of the world on your doorstep to explore. The island is well-supplied with frequent flights to Dubai and South Africa.”

If that didn’t make Mauritius enough of a draw, income is taxed at a flat rate of 15 per cent, and there is no council tax, capital gains tax or inheritance tax. Foreign buyers can get residency if they buy a property on a government-designated development, such as Royal Park, worth $500,000 (about £407,000) or more. Alex and Brett are not allowed to purchase a home in the village where they rent; they pay £3,000 a month for a four-bedroom villa with a pool. A two-bedroom apartment at Royal Park costs about $550,000 to buy, a good-sized villa about $1 million. 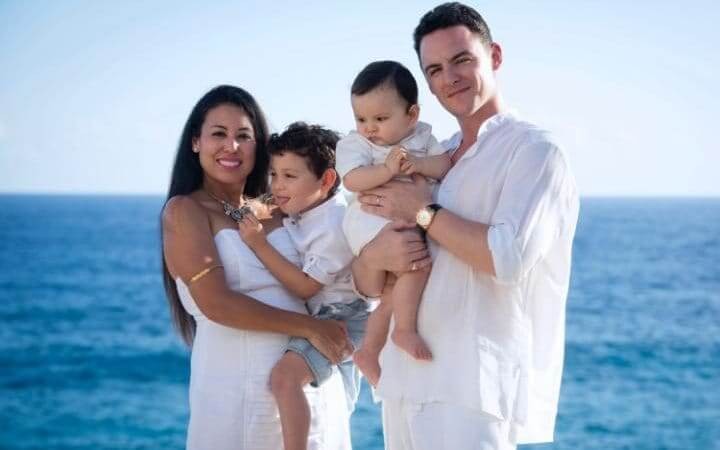 A tropical playground more conducive to family life, with zero income tax, was what drew Alistair and J V Russell to swap Fulham in west London for the Cayman Islands three years ago. They moved with their son Lysander, five, and have since had Cassian, now 21 months.

“Our story is actually similar to many others here in Grand Cayman. We loved city life but thought it could be better elsewhere,” says Alistair, 35, who works for an offshore law firm. “I wanted to keep my career so we considered Dubai, Hong Kong and Singapore as big financial centres, but rejected them for their fast-paced lifestyle.

“So then it was really the British Virgin Islands or the Cayman as options in the Caribbean, and Cayman offers much better services in terms of schools and health care. There is also the fact there are direct flights from the UK to Cayman and it’s much better connected to Miami.”

The Russells keep their 23ft boat at the bottom of the garden of their four-bedroom canal-front property in Governor’s Harbour, close to Seven Mile Beach and Cayman International School for Lysander.

“In Cayman, if you are an expat, you have to send your children to private school,” says Alistair, who says that expats tend to be British, American, Canadian or Australians. “So much about life on Cayman is about the water and we spend weekends snorkelling or diving off the reef.” 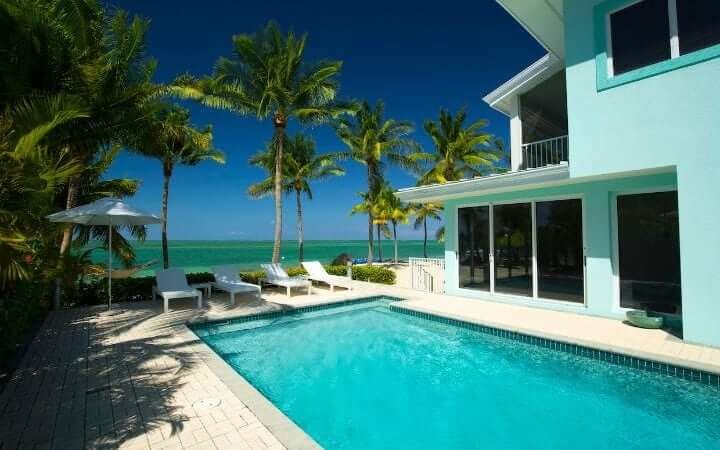 This beach house on Grand Cayman comes with sea views and its own mooring. It has 5,100 sq ft and three large reception rooms, and all three bedrooms have direct access to a balcony or patio. It is $3.64 million (£2.94 million) with Chestertons (020 7201 2071; chestertons-international.com)

They do work hard, he adds – JV works at the Marriott Beach Resort on the island – but the hours are more predictable. “I am never expected to work at night or weekends as I did in London,” Alistair says. “I worry that the children are living an incredibly charmed life but it’s hard to see us moving back permanently to the UK.”

Properties are more affordable than in London too. Four-bedroom canal-front homes cost $4,500 to $8,000 a month to rent, or about $1.5 million to buy.

“I do miss culture, so we fly to New York or Miami for our fix of urban living,” add Alistair.

Meanwhile, Bali, that popular weekend break for south-east Asians and Australians, is where 32-year-old Londoner Alicia Pasley-Tyler decided to hang her hat in 2015, when she gave up working for an estate agent. 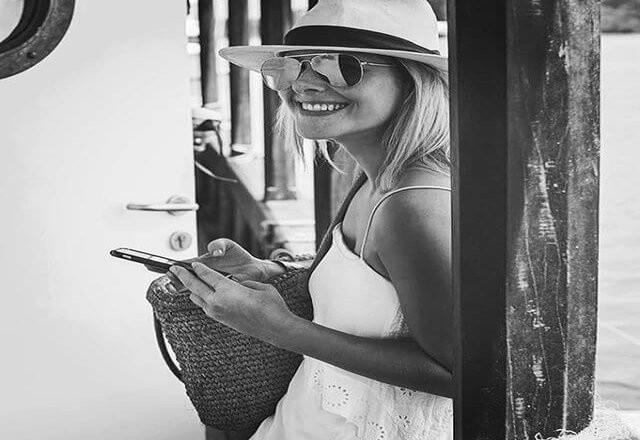 She left her two-bedroom flat in Chelsea to move to a three-bedroom villa in the south coastal village of Canggu and set up her own villa rental business, Latitude Lifestyle (latitude-lifestyle.com).

“I took a jump driven by an insatiable need to improve my life,” Alicia says. “In London I felt like I was on an exhausting hamster wheel of work and constant parties, but felt empty despite the buzz. There were also too many overheads for me to set up a business as I have done here, where income tax is only 10 per cent.”

Her sunshine-filled days are spent with an early walk on the beach, a yoga session, or a healthy breakfast business meeting. “We all live a laptop lifestyle here. There’s a variety of people, from retired eccentric creatives to burnt-out high fliers.” 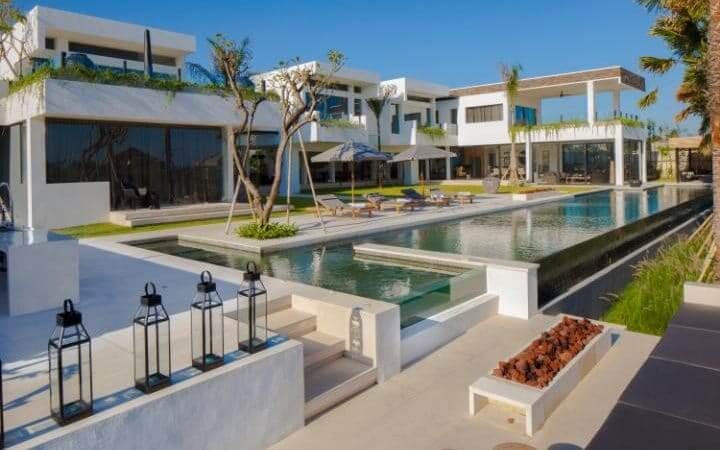 Becoming a home owner is also easier. “Many expats build their own homes here. Land and building is very affordable,” Alicia says. “Or you can purchase property on a long-lease basis, as many British people do.” For example, three-bedroom Villa Balian, in a beautiful surf spot in the north of Bali, is for sale for $550,000 on a 28-year lease.

Living the easy lifestyle isn’t always as simple as it sounds, mind. “You have to be super driven not to get caught up in the holiday atmosphere of the island,” Alicia says. “Equally, many say you get bored living on a small island. But I am yet to do so.”

This article was written for The Telegraph by Liz Rowlinson and was published online on 21 JANUARY 2017.