The Cayman Islands has worked diligently in expanding it’s tourism sector. In fact, 2014 saw a record number of tourists visiting our sunny shores and being introduced to our Cayman Kind initiative that includes a variety of accommodations, award winning cuisine, outstanding water sports and a seemingly endless list of activities ranging from cultural events to discovering our diverse nature and the sister islands. The Owen Roberts International Airport has been doing an exceptional job of hosting travelers but has finally come to the position where it needs to expand in order to serve our visitors even better. 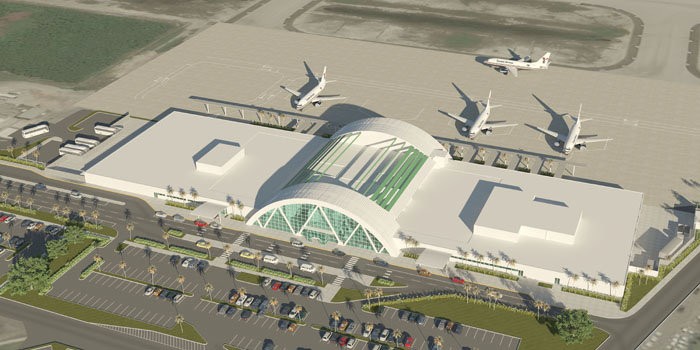 The Airport officials unveiled the new design for Owen Roberts International Airport this week. The airport will more than double in size and in the amount of passengers it can comfortably handle.

Airport representatives and architects working on the new $55-million airport say the new building will be constructed in four phases, allowing the airport to stay in continuous operation throughout the project. The new building will have more than 200,000 square feet and triple the space for public areas in the terminals, a new air-conditioned indoor waiting area for arrivals, and more space for retail and food vendors.

Steve Harrill, an architect with U.S.-based design firm RS&H, said this week that the design is 30 percent complete. “There are a lot of details that aren’t worked out, but a lot of the big picture items are,” he said. He expects to begin construction late this summer on the first phase of the project. If things stay on schedule, the completed airport could be ready in the first half of 2018.

Mr. Harrill said the building, which currently has capacity for 1 million annual travelers, will be able to host 2.7 million annual passengers comfortably, which would be large enough to meet demand for 20-year estimates on how many passengers could pass through Owen Roberts.

When designing an airport or similar building, Mr. Harrill said, “It’s all about putting the right space in the right place.” Airports have public areas, a secure area for after the public goes through screening, and secure areas for baggage handling and other operations.

Christina Ghets, the lead designer on the project with RS&H, said the design was meant to “reflect the distinct character of the Cayman Islands.” After studying Cayman’s cultural heritage and natural history, she said, they decided on a design based around the shape of a green sea turtle, what she called “a very elegant shape.”

She said the design also preserves the prominent A-frames in the current building and adds two smaller A-frames to each side of the main terminal, representing Grand Cayman and the sister islands with the triangles facing out to the tarmac and towards the parking lot.

Mr. Harrill said they have hired several local firms for the construction work.

Funding for the redesign comes from a $13 fee paid by each passenger who passes through the airport, which the Cayman Islands Airports Authority collects from airlines.

Consultants looking at the project earlier said that Cayman Airways owed more than $10 million in unpaid passenger fees, but earlier this year a CIAA representative said the two organizations had reached a deal to repay the debt.

RS&H has been involved in designing numerous airports, including in New Orleans, Palm Springs, Lisbon and San Antonio.

This article was published by Charles Duncan in the Caymanian Compass on March 11, 2015.