Cayman Islands developer Joe Imparato will design and build a 100-room clubhouse and lodge as part of the Arnold Palmer-branded Ironwood golf resort planned for the eastern districts.

Mr. Imparato, an equity partner in the project, has unveiled plans for a luxury hotel and condominiums, similar in style to the Caribbean Club, which he developed on Seven Mile Beach.

The estimated $30 million development will feature a golf pro shop, swimming pool, tennis center and two restaurants. It will be the centerpiece of the planned PGA-level course designed by the Arnold Palmer Design Company. 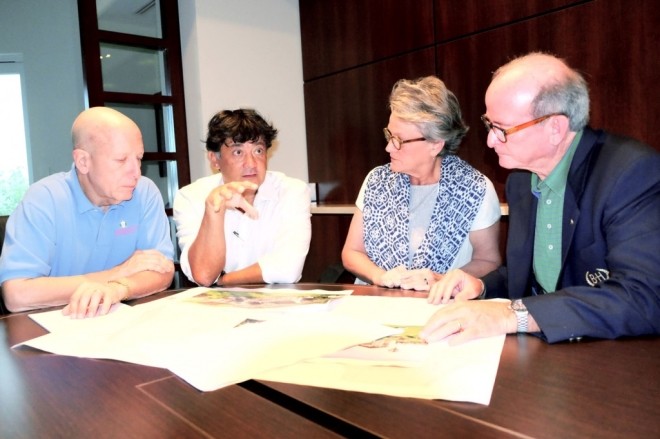 From left, developer Joe Imparato, golf club architect Derek Serpell, and Amy and Roy Saunders go over plans for the Arnold Palmer-branded Ironwood golf resort on Monday.
Mr. Imparato said Monday that plans for two five-story buildings, featuring 62 hotel rooms and 40 residences, linked by a shared lobby, would go to the Central Planning Authority in the next few weeks.

He said he had met with Mr. Palmer several times before the famous golfer’s death in September and was impressed with his personality and enthusiasm for the project.

“He looked me in the eye and said, ‘I want you to build this project for me,’ and I couldn’t say no. He stayed here at the Caribbean Club, and he loved it. This is what we are aiming to do in terms of the quality of the clubhouse and lodge.”

The clubhouse and lodge are scheduled to open in late 2018.
Amy Saunders, Mr. Palmer’s daughter, who flew into Grand Cayman for the weekend to review the plans, said she and her husband Roy Saunders, who run the Arnold Palmer Design Company, are keen to see the project through to the finish.

“This was a project that my father had a real passion for. Seeing the property and the people here on the island inspired him even more,” she said.

Mr. Saunders said the resort would be a destination golf course similar to Mr. Palmer’s Bay Hill Lodge in Florida. The group eventually plans to open 20 similar courses around the world.

Mr. Imparato said the clubhouse and lodge would be a partnership between the Arnold Palmer group and his company, City Services Ltd.

Designs for the project show a ground-floor restaurant opening out to a grassy area and putting greens, as well as a rooftop restaurant for formal dining. The designs also feature four tennis courts and a viewing gallery.

Mr. Imparato, whose other Cayman ventures and properties include West Shore Center, Galleria Plaza, Buckingham Square, Marquee Plaza and Caribbean Plaza, said he has every confidence the project will be a success, despite its location away from the main Seven Mile Beach tourist strip.

He said the proximity to Health City Cayman Islands would be a key selling point, particularly for retirement residences and homes around the golf course.

“This is the first of many projects being built in the East End and North Side. There is a lot going on around Health City,” he added.

A deal with government for a 10-mile highway extension to provide speedier access to the resort now seems unlikely to materialize in the next few months.

A deal for Ironwood to get duty concessions in lieu of the road partnership will be triggered on Dec. 18 if the road deal is not done or a new time line negotiated.

Mr. Imparato said he is relaxed about the issue.

“That’s still with government,” he said. “In the overall picture, it is going to become a necessity for the island, and I’m sure they will find a way to do it. Between our project, Health City and all the development taking place at Rum Point and in the eastern districts in general, I think government recognizes the need for it. We are proceeding with the expectation that it will happen in time.”

Ironwood managing director David Moffitt said there would be 150 lots sold around the golf course during phase one of the development, which also includes a town center and beach club.

The developers are aiming for a late 2018 opening for the clubhouse and lodge and the golf course.

This article was written by James Whittaker and published in the Cayman Compass on 12 December, 2016