Amid the many reasons vacationers head to Grand Cayman — stunning sunsets along Seven Mile Beach, spectacular coral reef diving, shopping — dining may get overlooked. And yet, international and local chefs continue to open outstanding eateries in the Cayman Islands, creating a surprisingly vibrant food scene filled with Caribbean and European influences.

A nascent farm-to-table movement has landed more fresh, local produce on the plate and the sheer breadth of budgetary options — from wallet-busting, pull-out-the-stops tasting menus to funky food shacks for fried conch — make you wish you were staying longer in the Cayman Islands. 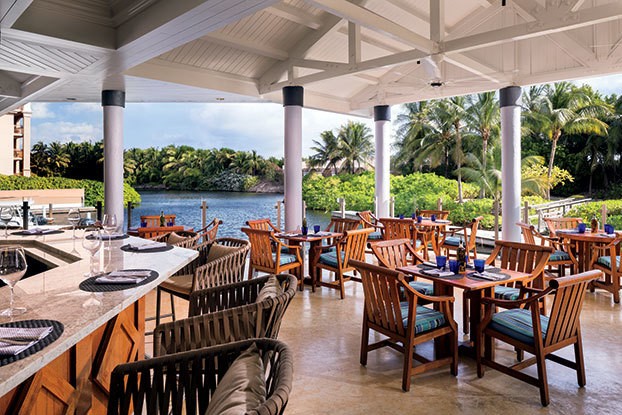 “The culinary scene really reflects our diversity,” says Marzeta Bodden, who founded Cayman Food Tours two years ago to give visitors a history-infused sampling of the country’s culinary bent. With 98 nationalities among a local population that loves to eat out and some 345,000 annual visitors hailing from many of the world’s top food cities, you’ve got the makings for the ultimate food-lovers’ destination. 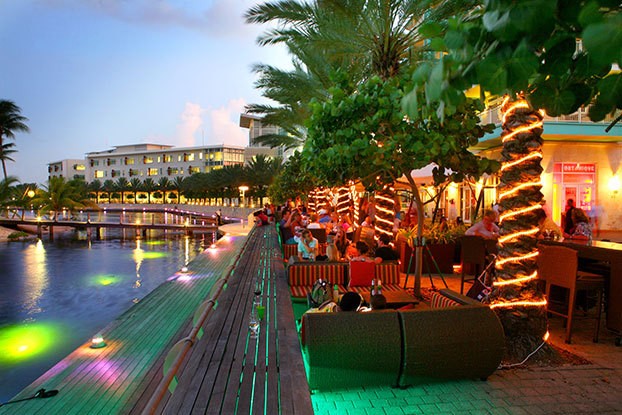 The sun shimmers on the white sands fronting The Ritz-Carlton on Seven Mile Beach. As swimmers splash in the turquoise waters, there’s some serious food business going on under a white tent erected on the sand. Under the eaves, Daniel Boulud (of NYC’s famed Daniel) is showcasing tricks of the cooking trade to a standing-room-only crowd. This is the annual Cayman Cookout, one of several food-focused festivals on Grand Cayman. Started by renowned Chef Éric Ripert, who helms The Ritz-Carlton’s Blue restaurant and NYC’s Le Bernardin, the annual event brings in top toques like Marcus Samuelsson, Jose Andres and Anthony Bourdain to “wow” guests with cooking instructions and gala dinners.

Cayman Cookout encapsulates a larger trend on Grand Cayman: chefs with successful eateries elsewhere are discovering this market and bringing their talents to the fore. Among those well-known chefs drawn to the island is Michael Schwartz, who opened an outpost of his popular Miami Beach eatery, Michael’s Genuine Food & Drink, in the posh Bay area. Schwartz brought along his dedication to sustainability and focus on local ingredients — farm-fresh eggs, tomatoes, greens and fish.

Farmer’s markets have grown over the past several years (there’s one weekly at Camana Bay), and more chefs are partnering with local farms to source ingredients now. Another Miami-based chef who set her sights on Grand Cayman and embraces as many local ingredients as possible is Cindy Hutson, who opened Ortanique in 2010. The classy waterfront eatery in Camana Bay offers fresh local ceviche each day and three-course monthly “Cuisine of the Sun” dinners focused on the cuisine of countries such as the Philippines, Portugal and Jamaica.

Meanwhile, already successful chefs are doubling down. The duo behind Agua Restaurant & Lounge on Seven Mile Beach recently opened Catch Restaurant & Lounge in Morgan’s Harbour, a waterfront eatery focused on daily catches and artisanal cocktails. And the chefs behind the island catering service Mise en Place opened The Bistro on Seven Mile Beach, a French eatery with an eclectic, vintage-modern vibe, a strong wine list and plenty of daily specials.

Over at the nearby Westin, Executive Chef Sandy Tuason has spearheaded menu upgrades at the resort’s three eateries. Tuason is fond of showcasing local farmers’ produce on his plates, and his fine-dining, al fresco Beach House restaurant, serving coastal cuisine, may have the best seats for a sunset dinner in town. The Beach House won the award for Best Food at the 2015 Taste of Cayman festival.

Meanwhile, the Westin’s casual al fresco Tortuga Beach Grill & Bar is a reasonably priced way to enjoy the million-dollar view — there are even a few tables right on the sand. Tuason has also built an impressive Sunday Brunch at the Westin’s Ferdinand’s restaurant — drawing a strong local following with dishes that include a 15-pound roasted snapper and a succulent rendition of curried goat.

Not to be overlooked, The Ritz-Carlton, Grand Cayman opened a new eatery on its premises. Andiamo offers homemade pastas, pizza and other Italian eats in a laid-back setting that includes al fresco terrace seating. The hotel’s steakhouse, Seven, was also refurbished, with a focus on leather, wood and traditional décor. 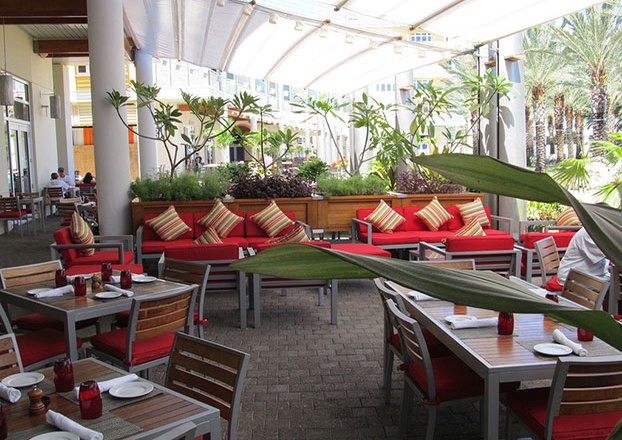 Like any great foodie destination, Grand Cayman has adopted wider trends in the food world, including food trucks and burger crazes. Norma Jean’s rolls into the north end of Seven Mile a few days per week serving up delicious barbecue from its truck restaurant, while Sunshine Suites’ casual Sunshine Grill has people spilling out the door most nights.

Even as new trends take hold, however, several of the island’s long-time establishments are sporting fresh faces. The Lobster Pot (circa 1965) has reopened in Georgetown with an impressive new deck, boasting lovely harbor views and a menu of daily catches. After a redevelopment of Cayman Islands Yacht Club, the original Morgan’s Harbour has reopened as Morgan’s with a spacious waterfront deck and a true ocean-to-table menu, given it serves seafood caught daily by the restaurant’s own fisherman.

“When people come here they often say they didn’t realize there was so much going on in terms of food,” said Oneisha Richards, deputy director at the Cayman Islands Department of Tourism. “It’s a unique position for us. We can honestly say, ‘You’re going to be wowed.’”

Grand Cayman hosts a number of marquee food events throughout the year, including:

“Food can show the culture and norms of the place you are visiting,” says owner Marzeta Bodden.

The cultural walking tour departs six days per week with a maximum of 10 guests and includes unique tastings and drink experiences. Cost is $75 per adult, $50 per child.

This article was published on Travel Agent Central on April 29th, 2015 by Donna Marino Wilkins.