The number of active companies on the Cayman Islands company register has exceeded 100,000 for the first time in its history. 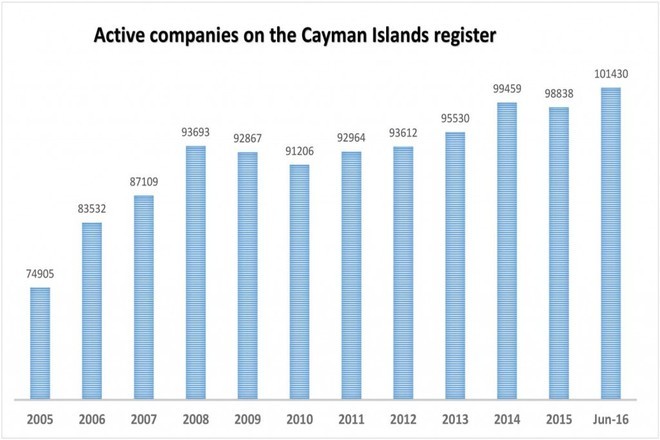 Cayman-registered companies were poised to break the 100,000 mark for the past two years. In 2014, the number of registered companies fell just short at 99,459. Last year, this figure declined slightly despite a 7.8 percent increase in new registrations, as company terminations were 64 percent higher in 2015 than in the previous year.

The rise in terminations was mainly due to 1,359 local companies being struck off the register in 2015, compared to the usual 100 to 200 per year, in the wake of a new company licensing regime.

In the first seven months of this year, new registrations were 12.3 percent below the levels seen at the end of July last year, but terminations have also declined significantly. By July 6,555 new companies were registered, compared to 7,475 in 2015 and 6,453 in 2014. The newly introduced limited liability company form attracted 21 registrations in the first month.

The growth in the second quarter indicates that the impact of the Panama Papers revelation on the demand for offshore financial services has been benign.

“Our success lies in our positive contribution to the world economy as a premier global financial hub for investment capital and financing,” Mr. Scott said. “While other jurisdictions may have been challenged by situations such as the Panama Papers disclosure, the strength of our company register, along with the overall growth we’re seeing across the industry, demonstrates the confidence our clients have in the Cayman Islands.”

New partnerships registered in Cayman increased by 1 percent in the 12 months ending in June compared to the same period last year. A total of 3,334 new partnerships were incorporated in Cayman during the past year, continuing the trend of uninterrupted annual growth since 2009/2010.

As of July, 1,923 new partnership registrations significantly exceeded 588 partnership terminations and resulted in more than 19,000 active partnerships registered in Cayman.

However, the number of trusts on the register dropped by 1 percent to 1,784 in the first two quarters of this year, continuing a trend of small declines since 2014. As of July, 68 trust terminations outweighed 56 new trust registrations, General Registry statistics show.

This article was written by Michael Klein & published in the Cayman Compass on August 17th, 2016