Two decades after Ken Dart renounced his U.S. citizenship and took his tax attorney with him to the Caribbean, the billionaire bond investor and local kingpin is reinventing himself as the Cayman Islands’ biggest real estate owner.In a rare glimpse into Dart’s holdings, Mark VanDevelde, chief executive of the tycoon’s Cayman-based Dart Enterprises holding company, recently told Bloomberg that Dart is less interested in distressed foreign debt these days, increasingly turning his focus to luxury real-estate development on the Cayman Islands and elsewhere, especially in Latin America. 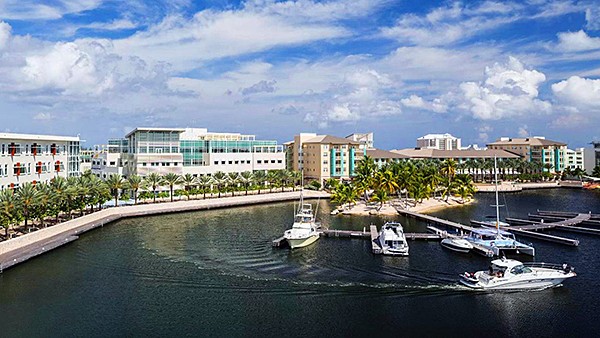 “Vulture is a small part of our overall portfolio,” said VanDevelde. “We had demand for office tenants so that’s where growth has been since conception. We’re now shifting our focus towards resorts and residential.”

Dart’s mid-1990s move to the Caribbean, far from his family’s Michigan-based polystyrene cup business, was widely criticized as a brazen tax dodge. Today, he’s often seen strolling the grounds of his upscale Camana Bay which includes a residential development, a marina and town center with offices that cater largely to hedge funds and other financial companies. A five-star Four Seasons hotel may soon complement the development, all linked by a network of bike paths.

Camana Bay hotel guests dine at an outdoor patio overlooking a tennis court with a helipad across the harbor where Richard Branson recently played Anna Kournikova. Paul Allen cuts through the local waters from time to time in his 414-foot yacht, complete with helicopter and submarine.

Viewed from the sea, Dart’s holdings are impressive. A short boat trip from a pretty little harbor and past a sandy point popular with snorkelers revealed a pristine beach sandwiched between a forest and shoals -– all Dart properties. The boat glided by an immaculate brick walkway at Camana’s Town Centre connecting outdoor restaurant seating with a fountain flanked by neatly aligned palm trees. But you’d never know any of this belonged to Dart. There’s only a small, unassuming placard on the entrance of one of the development’s office buildings with Dart’s name on it. No Trump-like trumpeting, here.

Camana is the crown jewel of Dart’s land holdings, which now account for upwards of 8 percent of this white-beach rimmed, scuba-diving paradise for the rich and famous. He’s also snatched up land for development in Turks and Caicos and the Bahamas as well as in at least 10 countries around the globe. The company takes pain to stress that along with the massive luxury resort developments, Dart is setting aside land for conservation.

“He has lands around the globe, hundreds of thousands of acres, in Patagonia, Australia, New Zealand, U.S., Mexico, Jamaica, Canada, and most of those lands are in remote, pristine areas,” said VanDevelde, a fellow Michigander. “The locations lend themselves to conservation efforts because they are remote in nature.”

In his role as Cayman Islands developer and jobs generator, Dart is emerging as a kind of leading member of the local monied gentry. A big reason for his prominence: Dart’s projects have served as a counter to the economic woes wrought by the 2008 financial crises. At the time, assets under management of some 10,000 hedge funds registered on the island dropped by almost half from $3.4 trillion, according to Anthony Travers, the chairman of the Cayman Islands Stock Exchange. In 2009, the local economy contracted 7 percent.

In addition to his real-estate activities, Dart has also boosted the local economy by headquartering his global investing business at his resort and office development. From his offices in the Cayman Islands, he manages a $5 billion fortune, according to the Bloomberg Billionaires Index, including about $700 million in at least 10 bio-tech companies, as well as billions in profits from decades of so-called distressed debt investments from Brazil, Greece and Argentina. South San Francisco-based Exelixis Inc. and Cambridge, Massachusetts-based Alnylam Pharmaceuticals Inc. are among the bio-tech stocks he has counted among his holdings.

One of three sons of the late founder of Mason, Michigan-based Dart Container Corp., Ken stepped down as President of the cup company last year and is no longer a shareholder, said Tony Wilbert, a spokesman for Dart Enterprises.

His investing strategy in nations on the verge of default has stirred up resentment around the globe. Argentina President Cristina Kirchner, whose tax authorities once raided Dart Container’s local unit, has tagged him a “vulture” investor for trying to squeeze Argentina to repay its distressed debt at full market value.

Over the years, Cayman’s governors have welcome Dart’s deep pockets. Most recently, he demolished an abandoned Courtyard Marriott to make way for his 263-room, 62-condo Kimpton hotel. In addition to real estate, Dart also has made investments on the islands in retail, finance, construction services and technology.

“We’ve had seven lean years and if it hadn’t been for Dart, the local economy would’ve looked a lot worse,” said Travers. “But there is a big question mark on where Dart’s involvement in the Cayman Islands ends up. He is starting to control a substantial part of the local economy.”

In his biggest power grab yet, Dart pushed through a $400 million deal with the government in 2010. Among other things, it provided the permits Dart needed to build a new waste treatment facility, extend a highway, and redevelop the abandoned Marriott site. As part of the deal, Dart agreed to build a professional career training center and provide $16 million for government social programs.

The plan, though, raised the ire of some islanders, who objected that it was pushed through without proper government approvals and that it came with “extensive” tax and duty concessions, according to a report released in June by the government’s auditor general.

Dart’s dealings with the island government also show how tax havens, intended to attract wealthy investors, can end up putting local governments at a disadvantage: When a government is weakened by its lack of a tax base, it doesn’t have much negotiating clout with tycoons whose dollars they’ve worked so hard to bring in.

“We have in this country an entity of seemingly unlimited wealth, known as the Dart Group, that over the past 10 years have accumulated large amounts of real estate and has grown in leaps and bounds,” lawmaker Osbourne Bodden said in a March 2012 editorial published on the local news website Cayman iNews. His People’s Progressive Movement became the ruling party in 2013 elections after it opposed Dart’s deal with the government. “The master plan is indeed to make these islands Dart Islands –- make no mistake about that.”

The spat hasn’t slowed Dart’s expansion. He’s in the middle of negotiating a similar deal with the current government.

“If you’re worth billions and got limitless cash, things happen,” said Travers. “It’s a relentless development.”